Anyone who knows me, knows that I’m a Google fanboy. I don’t own any Apple products and will jump at any opportunity to tell anyone around me why Google is superior to Apple. Let me share with you one reason. Google Opinion Rewards is an app for your phone that periodically offers you the option to take a short survey.

Sometimes the survey is about a place you have visited recently (based on location history) and sometimes it is something completely random; but always, it only takes a few moments. You get paid (“rewarded”) for your time with Google Play Store credit. I take the surveys when I get a free second and I actually enjoy them; I think it’s kind of fun to know what companies want to know from you (the surveys are sponsored by other non-Google companies).

I first signed up for Google Opinion Rewards just over two years ago and wanted to see how much money I had made for what is basically zero time and effort investment. The app allows you to see your rewards history, but only on your phone. So I had to get a little creative here…I ended up taking screen grabs of all of the “data” and putting them through an image to text converter (free-ocr.com) to get the data into text form I could use. 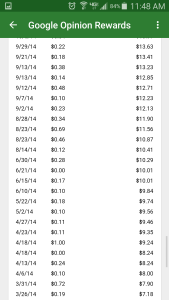 The screen-captured form of the data. 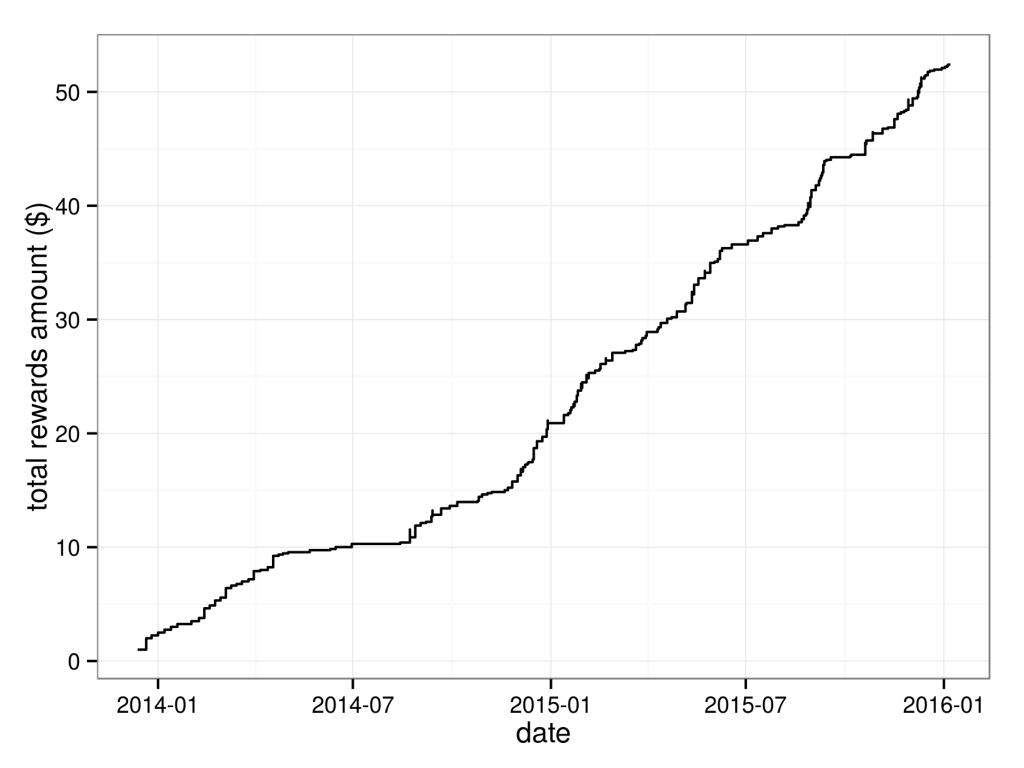 Unsurprisingly, the bulk of reward amounts are on the low end of the spectrum. 10 cents is the mode, which is essentially the “thanks but no thanks” reward for your opinion. 25 cents is a popular number too, but interestingly 50 cents is not.

The cumulative plot shows that there have been some “dry spells” and some “hot streaks” to my survey responses, but I’ve been pretty consistently rewarded, especially in the 2015 year. There is no trend in the amount of a reward over time since I signed up for the service.

I have earned a total of $52.50 in Google Play credit for doing what I would effectively call doing nothing. That’s a pretty great deal, now of course you can only use the credits in Google’s own store, but hey that’s pretty good considering you can get apps, music, movies, and books there. For me, it has meant that I can buy any app whenever I want one without hesitation, for “free”. I have about $20 of credit sitting around right now, maybe I’ll go buy some Snapchat head effects…